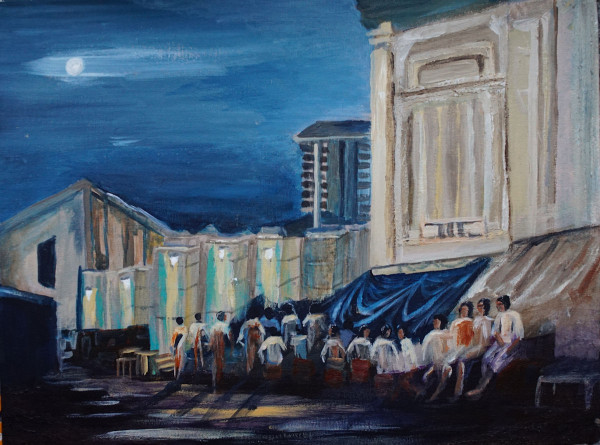 This week and last week, we were looking at moonlight and nighttime lighting.  I didn't have a night scene in my mind that I particularly wanted to paint, so I followed Colin the Art and used the same reference image that he was using.  It was interesting to see how our results were different!  He was using a very square canvas (apparently a very poor one that slurped up paint instead of letting it sit on the top, which he had been given by a local art shop who had bought a bunch of them and were finding that customers complained, so had asked him to test one.  I'm not sure I'd even notice what was going on, tbh. :-D )

I don't like what happened to the background pillars, I was trying not to be too 'precise' and more impressionistic with the architecture, but I think the pillars just look wobbly.  But I am pleased with the perspective on the figures, which I did very quickly, but I think they do work, unless you stare at them too long, and I like the light on the blue-black sheet, even though I'm not sure it looks like a cheap black plastic sheet, which I believe is what it was...   I learned how to make figures disappear in to the background by painting a series of heads of different sizes just as black blobs first.

Apparently this is a scene of poor Patagonian farmers who have come in to market.  The market building is the rather grand one on the right.  They are too poor to afford anywhere to stay, so they sit on fruit-crates to eat, then sleep under the groundsheets hung on the buildings.
Collapse