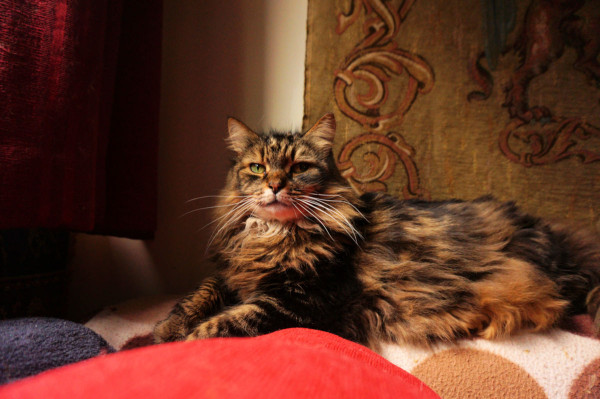 He died this morning.  He was seventeen, not a bad age for a very large cat, and he had had failing kidneys for several years. He was sitting next to Pp,  got up, fell over and died almost instantly.   Not a bad way to go.

He was a grumpy opinionated old cat, who considered himself extremely important.  He was a bit of a coward at heart, and was always the cat who would retreat sadly outside if we had a new foster dog, until he'd decided it was safe to return.   But though he never liked any of the dogs very much, he was more than willing to terrorise them by looming at them and bopping with a large, clawed paw, as long as he was confident the dog wouldn't have a go back.   For that matter, he'd have a go at the other cats, too! He was a bit of a monster with other animals, really, but he loved cuddles and human company and had a great purr.
Collapse