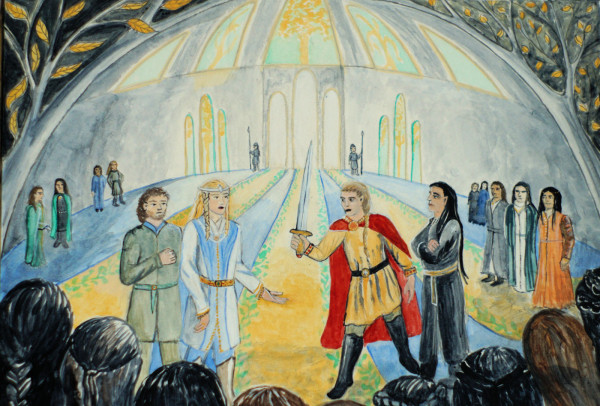 "Then King Felagund spoke before his people, recalling the deeds of Barahir, and his vow; and he declared that it was laid on him to aid the son of Barahir in his need, and he sought the aid of his chieftains.  Then Celegorm arose amid the throng, and drawing his sword, he cried  ‘Be he friend or foe, whether demon of Morgoth, of Elf, or child of Men, or any other living thing in Arda, neither law, nor love, nor league of hell, nor might of the Valar, nor any power of wizardry, shall defend him from the pursuing hate of Fëanor’s sons, if he take or find a Silmaril and keep it. For the Silmarils we alone claim, until the world ends.’"

On Friday evening, we decided to set off from Saltash and go downstream.  The nice thing about launching from Saltash is that it's practically seaside down there, so the water is clear and salt and the bottom is all sandy and there is no mud!  The slightly alarming thing is that the river is wide down there, so it can get a bit windy, and there are a lot of boats.  If you go down towards Plymouth, there are frigates and submarines, too.   I find  being in a canoe and sharing a river with a frigate a bit alarming!

But fortunately there were not many boats moving on a Friday evening, and all of them were tiny.  The wind was quite calm too, so we crossed the Tamar just downstream of the railway bridge, went downstream and found ourselves outside the naval dockyard.  We weren't sure quite how close to it we were supposed to paddle, so we crossed the river to the Cornwall side again, which was much less daunting.

I forgot to bring the SD card for my camera, so you'll have to imagine the three egrets, the heron and the oyster-catchers, and the deep clear green water under the trees leaning down from the rocky shoreline.    We went downstream a little, then went around into a cove, where we saw a labrador sitting sadly by the river waiting for its person to stop doing other things and throw a ball into the water.  The labrador's person told us that the village was called Wilcove.   I've never been there before, so we paddled in to have a look, and found that it had a pub, and a driveway going behind the pub that was currently underwater.  I liked seeing the cars parked as far up as they could go, unable to escape until the tide went down.
Collapse