Finrod, Maglor and Hador.  Pp complains that Finrod looks like a girl. 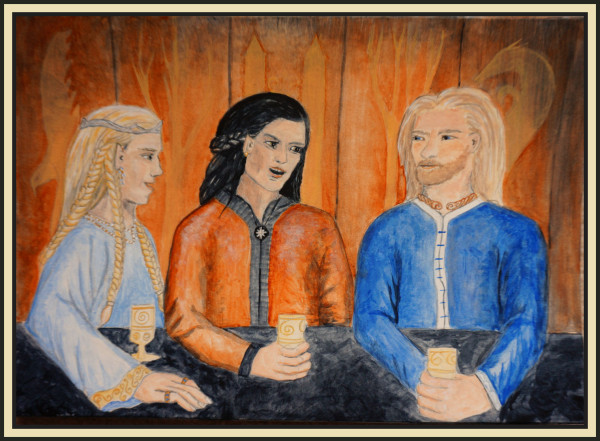 It's detectable with the lines on the tapestries, how far the camera is distorting the slight curve to the card after painting.  It's very slight, but the camera makes it look almost like a bowl, and I have to cut the edges off.  Perhaps a different lens, or dig out the scanner.
( Collapse )

I experimented with putting a border on these using software.  I'm not sure it works. I think maybe I should put a border in paint on the actual picture.

I haven't finished reading this yet, but I already know it's going to be the kind of book where I just want to read out random passages to strangers, so here is a bit I liked:

"To the lawyer, truth is facts unadorned. Whether such facts are ever findable is another matter.  To the creative writer, fact is raw material, not his taskmaster but his instrument, and his job is to make it sing... Was there ever such a thing as pure memory?  I doubt it.  Even when we convince ourselves that we're being dispassionate, sticking to the bare facts with no self-serving decorations or omissions, pure memory remains as elusive as a bar of wet soap."

This is so true.  I don't remember actual stuff that happened.  I only remember the story I told myself about it afterwards.  It's a way better story, anyway. Internally consistent, people have motivations that make sense, it's just so much better than the primary world.

The first chapter is titled "Don't Be Beastly To Your Secret Service"  and is mostly about people working for MI5 and MI6 ranting at spy-thriller writers.  It amused me enormously, and here is a randomly selected line, about his experience at MI5:

"Spying on a decaying British Communist party twenty-five thousand strong that had to be held together by MI5 informants did not meet my aspirations."

Or, on British Intelligence in general "I would guess there is not a spy agency anywhere in the Western world that has enjoyed more mollycoddling from its domestic media than ours. Embedded scarcely covers it. Our systems of censorship, whether voluntary or imposed by vague and draconian legislation, our skills in artful befriending, and the British public's collective submission to wholesale surveillance of dubious legality are the envy of every spook in the free and unfree world."

He contradicts himself a bit, but I find him too hilarious to care.

Oh drat, some LJ change has disabled my 'all power corrupts but we need electricity' tag for being too long.  ALAS.
Collapse