(I think you are worrying the human, Maglor.) 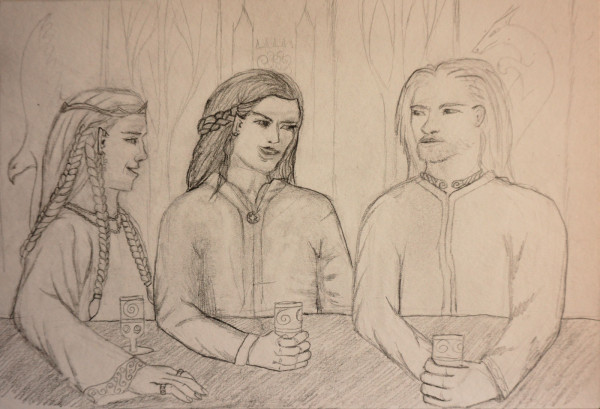 Finrod on the left, blond with a crown and jewellery, Maglor dark-haired in the middle (I did try to think if I could put a harp in there to show it was really Maglor, but there isn't a space for it and really, he can't have a harp in front of him ALL the time) and Hador on the right looking slightly worried.

As Pp says, these are not characters you tend to think of together, but there's no reason why not.
( Collapse )

I decided to do higher contrast on these pencil drawings so they would photograph a bit better, and also because I wanted to correct Lalwen's pose and Cirdan's beard a bit.  You can get away with much less contrast for pencil lines if you are going to overpaint, I now realise, but if you actually want to see if the pencil sketch looks good on its own, you need to stick more pencil on there.
Collapse