We headed up towards the Forge of Mount Tinang at last, pursuing Finculin, Ren the Unclean, and possibly even Sauron himself.  The Numenorean siege outside had so far distracted the orcs of the mountain, but now we came under attack.  We were climbing up the long winding stairs that went round and round the outside of a huge wide shaft, when we came under attack. Goblins had come out onto a walkway high above us and were firing arrows down at us.

One of the arrows hit Thrandin, our elderly Diplomatic Dwarf.  He was knocked off the steps into the shaft, and plummeted down out of sight!  Angruin ran back down the steps after him, and bless him, Prince Irimon did the same.     Everyone else went up, after the goblins.   But not all of them continued to go up.  As we ran down, a body fell past us.  Thingolodh had fallen too.  Other bodies fell after him, like a rain of goblins!
( Collapse )
And here is the last painting of the campaign.

* I wish we'd thought of a clever way to do this, but I fear what actually happened was that we all got hungry and decided to just vote the wraiths banished so we could stop for dinner.

A few months back I signed up for a Worldbuilding Exchange,  and got a brilliant assignment from

starbrow full of chewy ideas like loyalty, working together, hope, competence, Light and Darkness and kinslaying...

I need a life, apparently.

In the Ruins of Eregion 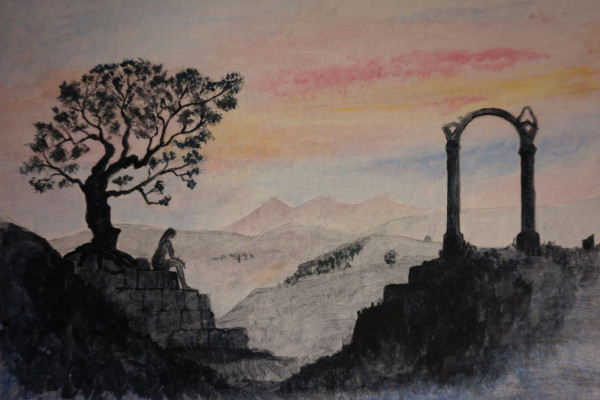 A couple of paintings that I made a few weeks back,  as part of