This was my favorite of the things I made for

artfeverfest. The prompts were Female Pirate/Mermaid, with a suggestion that the mermaid might save the pirate from drowning, Also mentioned: a sunset sea, and scary old fashioned siren type mermaids. I got carried away and ended up writing some letters as well as making pictures. (Under the cut: large images, probably not ideal for mobile viewing).

The perspective of the ship in the first pic is way off, but it kind of has to be to get everything in.  I'm not sure it was a good choice to do the text as a script font, but I tried it several ways and couldn't get it quite right.

Amalda's clothes are inspired by the historical pirate, Anne Bonny. The siren-mermaids were inspired by the oil painting "Ulysses and the Sirens" by Herbert James Draper, in which the sirens appear to grow legs as they come up out of the sea, and also by this Italian siren sculpture, where the siren (as often in old representations) is shown with two tails.

I have lots of thoughts about how Amalda became 'disreputable aunt Amalda' and how she left Uckfield and took to a life of piracy on the high seas, and possibly about her niece Jo, who will probably eventually run off to sea to join her.   I haven't written them down though.  Or not yet, anyway. 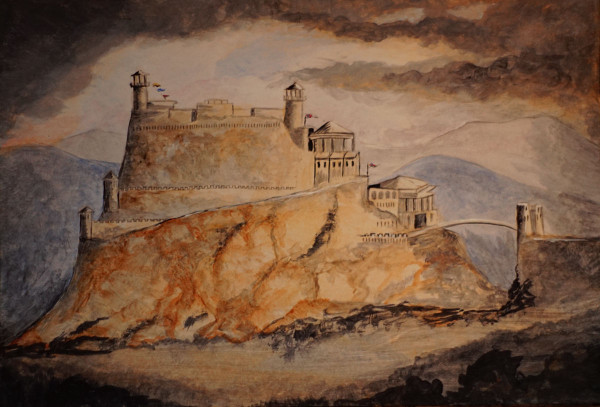 I was quite pleased with the general look of this, but am now wondering if it should have been bigger, somehow, given that this was the hill that withstood the downfall of Beleriand....

The design is loosely based on the fortress of Masada.  But I think if I'd reduced the size of the detail (eg, given it more towers but made the towers smaller) it might have been hard to get the whole thing in the picture.  It was only drawn on A4.
Collapse