Our rescued knight, Ecthelion of the House of the Silver Wolf, Knight of the Moon, could remember little of his ensorcelled sleep: it was a nightmare that swiftly faded.  He told us he had come to Chay on a mission from his prince, Irimon of Ciriatanore, who had dreamed of an elf-maiden, the River King's daughter, and had fallen hopelessly in love with her, despite never having met her.

We were a bit alarmed by this and united in tutting about the potentially disastrous consequences of unions between the Firstborn and the Aftercomers, except, obviously,  in very specific and fated situations, and indeed about the unwisdom of falling in love with women via dreams - but he just looked at us.   He's descended from Beren  (must remember to ask Sirithglor if he looks like him) , so I suppose the idea seems more feasible to him. He remains utterly determined to find this River King's daughter for his prince (although, again, I never met Beren myself, but sitting at home and sending out knights to search for Luthien for him?  Really?  Doesn't seem likely. )
( Collapse )

(The drawings of Ecthelion releasing the Dead and of Tuirak on the hillside were ones that I had in my head that I wanted to draw but I only actually scribbled them hastily on paper yesterday evening. )

Foster dog woke me early on Sunday, so decided to take a trip down to the beach before the day got too hot
On the way home, I noticed these fields planted by some unsung artist of a farmer.  It is blue flax, otherwise known as linseed, stretching all the way to the skyline. 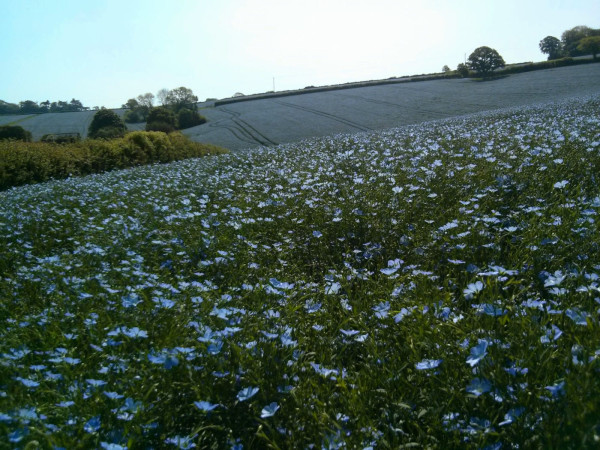 And here are a few photos of foster Carlos.