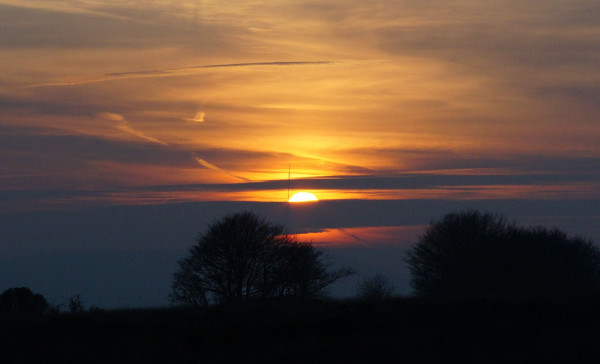 I missed the eclipse because a customer was driving me to the brink of insanity.

But this evening we walked the dogs up the hill in the sunset (and although it was rabbit o'clock, we didn't lose them once!), and then we went to Louis' Tearooms and sat outside and watched the dusk fall while eating piles of cheap but filling food (and there were sausages for the hounds). And it was good.

(That mast you can see spoiling the view just to the left of the sun is the big radio mast on top of Caradon Hill, on the East side of Bodmin Moor. )

I have to admit, I'd assumed that Jeremy Clarkson had long ago jumped his own personal shark, and had been playing an Ali G -style character based on himself on Top Gear for many years.   I'm rather saddened that recent events suggest that he was actually taking himself seriously.

Although I've not signed it myself*, I am amused by the fact that the petition to bring back Clarkson was set up on change.org.  Judging by the emails I get from change.org, they take themselves rather seriously, and their userbase profile has probably just changed in ways they were really not expecting...

Also, The Stig delivering the petition to the BBC  in a tank (or is it a self-propelled gun as I saw some gun nerd complaining somewhere?) was an inspired piece of theatre that I can only appreciate.

* because, amusing though Clarkson and petition both are, when it comes down to it, if he really thumped someone vastly poorer and less influential than himself, or even threatened to do so, that's pretty abysmal behaviour and I'm not sure an online petition to allow him 'freedom to fracas' is in any way an appropriate response.
Collapse