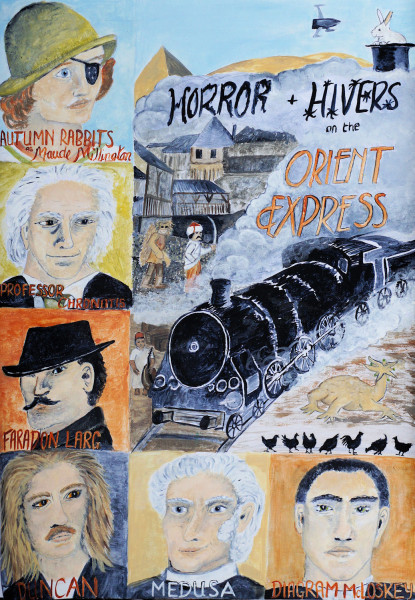 
Here is the poster of the roleplaying campaign conducted earlier this month!

In the end, there was only one hiver (played by me!) but I don't honestly see how I could have known this for sure at the time when I designed the poster. And the entire campaign came about as a result of Hivers doing manipulative Hiver things, so on a wider level the title works.

Unfortunately the paper has warped a little - I need to put it under something heavy to make it flat, but at the moment, Duncan, bottom left, is slightly distorted.

Just to the left of the train is Mahmoud, with his Oud. After going through practically the whole campaign with us from the time when we met him in Alternative 1930's Cairo, poor Mahmoud was horrifically killed just at the end, which was rather sad. You'll notice that Mahmoud is wearing a fez. Googling Egypt in the 1930s, I discovered a truly impressive range of fezes, which have entirely won my heart, although I don't think a modern person could possibly carry them off with such elan.
Collapse